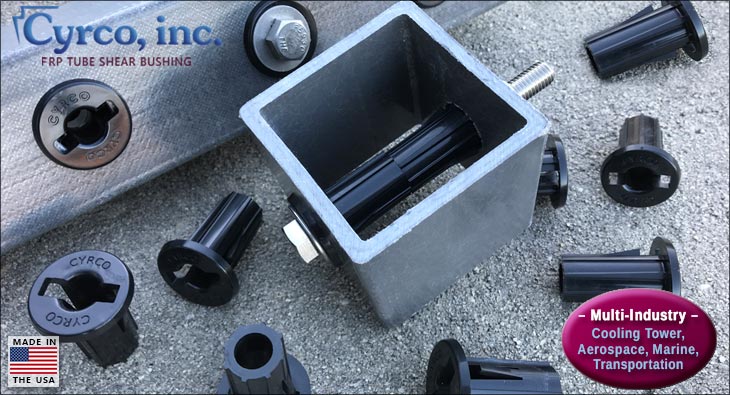 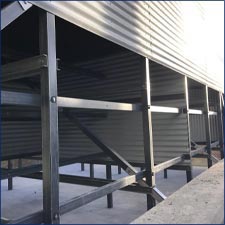 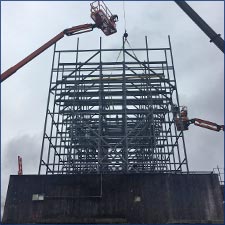 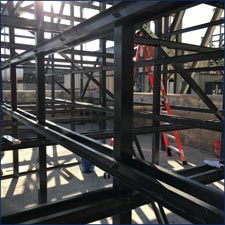 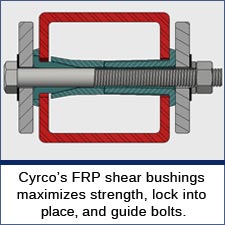 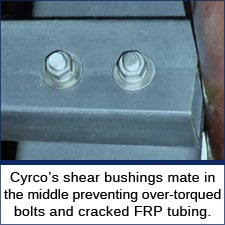 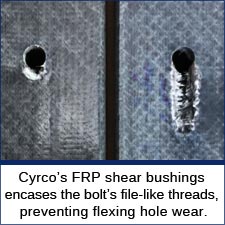 One of the major advancements in today’s construction of field erected cooling towers is the use of pultruded FRP fiberglass square tubes for structural tower framing. Pultruded FRP framed towers are lighter and cheaper than steel and unlike traditional wooden framed towers, they are unaffected by moisture, even after decades of exposure and direct contact with water. The lighter mass weight of FRP fiberglass also costs less to ship compared to wood, and is not even comparable to the expensive freight shipping of heavy steel. The fire resistance properties of FRP framing is another benefit of the material especially compared to traditional wooden framed cooling towers.

One of the slight disadvantages of FRP framing is that the material is somewhat flexible and more susceptible to excessive winds and storm damage. Flexing causes movement and bolt friction to the hole in the FRP fiberglass. With back and forth movement, over time the bolt hole size slowly increases. This is especially true where contact is made with the bolt’s threading that now acts like a metal file on plastic fiberglass. Eventually with continuous movement and flexing, the hole sizes increases at a more rapid pace, eventually making the tower more prone to a structural collapse.

Cyrco developed, patented, and manufactures a FRP Shear Bushing that fully encloses the bolt which then overcomes the FRP fiberglass hole wear caused by bolt friction. In addition to preventing FRP hole wear, Cyrco’s FRP Shear Bushing mate in the middle which stops the operator from over torquing the bolts and prevents stress cracking to the FRP fiberglass. Another advantage of our mating bushings is that the tubular connections act as a guide for the bolts, making for a much faster assembly.

In all FRP framing applications, but especially in high wind geographic locations such as coastal plains where hurricanes and tropical storms are frequent, Cyrco strongly recommends the use of our FRP Shear Bushings. With the use of Cyrco’s FRP Shear Bushings, today’s FRP cooling tower’s framing can now become capable of withstanding a Category 6 hurricane.